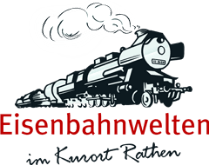 Events of the railroad worlds

On May 16, 2009 the family day "Märchenhaftes Rathen" took place in the health resort of Rathen.

The actors from the Rathen rock stage visited the railway worlds in the health resort of Rathen.

In the parking lot, the guests had their first contact with the railway world.

In the afternoon the sun finally shone in Rathen.

The new Stolpen train station was not only carefully examined by the MDR television team.

In December 2008 the Railway Worlds presented themselves at the Christmas market of the Königstein Fortress with our partner GeGa-Bahn - the passenger-transporting (!) Garden railway with real steam. www.gega-bahn.at

On December 6th, 2007 the Rathen kindergarten and Santa Claus visited the railway worlds in the health resort Rathen.

After a tour of the moving trains, Santa Claus gave small gifts to the children in the restaurant.

On September 23, 2007, 55 children from Chernobyl and their supervisors visited us as part of the 5th Rathen Rock Festival.

At the invitation of the Eisenbahnwelten in the health resort of Rathen, 55 children and 4 supervisors from Chernobyl spent an eventful afternoon in the world's largest LGB garden railroad system. They marveled at the 25 trains that drove on 4200 meters of track through the railroad landscape of Model Saxony. The operators of the facility, the Hanisch couple and team member Rainer Schüßler explained the numerous miniatures to the children, such as the Rathen rock stage, the Moritzburg or the Zittau mountains. What they admired most was the automatic coupling of trains in Oybin station.

At the end of the tour, the Eisenbahnwelten team presented soft drinks, sweets and, for each child, a baseball cap with the logo of the facility. The children from Belarus said goodbye to their hosts with a German-Russian thank you.

From September 21 to 23, 2007 the 5th Rathen Rock Festival took place in the health resort of Rathen.

Many guests visited us in glorious sunshine. Among other things, the Glauchauer Modelleisenbahnclub e. V., the mountaineering choir Kurt Schlosser and 55 children from Chernobyl.

Twice a day the high wire artists of the Traber family presented their skills over the Elbe.

The Eisenbahnwelten team had their hands full every day.

You can find more pictures from the visit of the Chernobyl children in the Events section.

The Axstone company presented weatherproof, malleable and flexible sandstone to the railway world in the health resort of Rathen.

The presentation stand was set up when it rained.

A bridge portal made of foam is covered with flexible sandstone.

The presentation shelf is also made of foam glued with flexible sandstone.

Pierre prepares the substructure of our dam for pasting.

The TV team from the MDR took the opportunity to report on Axstone.

The main body of the dam is for Gluing with the flexible sandstone prepared.

The main body of the dam is for Gluing with the flexible sandstone prepared.

The actors from the Felsenbühne Rathen looked at the new material.

We would like to thank Pierre and Volker very much and wish them all the best!

On May 12th, 2007 the family day "Märchenhaftes Rathen" took place in the health resort Rathen.

The actors from the Rathen rock stage visited the railway worlds in the health resort of Rathen.

On April 29, 2007 the official opening of the Railway Worlds took place in the health resort Rathen .

At 9:00 a.m., the Railway Worlds in the health resort of Rathen opened their gates for the invited guests.

This was followed by tours of the facility and normal operation began at 12:00 p.m.

After almost 2 years of construction, the gates of the Railway Worlds in the health resort of Rathen opened on April 6th, 2007 !!!

The first visitors arrived half an hour before the opening and a long queue formed at the entrance.

Exactly at 10 a.m., Margot and Lothar Hanisch cut the ribbon with the mayor, Mr. Richter and Mr. Brähmig (Member of the Bundestag).

After the visitors had looked at the Radebeul - Radeburg section, almost all of them couldn't believe their eyes that most of the facility was still ahead of them!

Our makeshift snack took care of the physical well-being.

Although only about a third of the planned trains made their rounds, everyone was enthusiastic.

Daniel is also called Hanisch, but is in no way related to the owners of the Eisenbahnwelten.

On December 15, 2006, the Rathen kindergarten and Santa Claus visited the Railway Worlds in the health resort of Rathen.

After a short tour, the children could finally see the first train going.

Then Santa Claus gave presents to the children in the rooms of the future show workshop.The children accepted their presents with wide eyes.

Now the children could finally open their presents.

On September 23rd and 24th, 2006, the 4th Rathen Rock Festival took place in the health resort of Rathen.

Visitors had the last opportunity to visit the construction site of the Railway Worlds in the health resort of Rathen .

When the weather was perfect, many guests from near and far looked around the property. The skepticism that often still prevailed at the entrance as to what might be emerging there was increasingly disappearing from everyone's face. At the end of the day, all guests could feel a total surprise and enthusiasm.

A huge success for us!

Many Rathen guests did not line up at the ferry, but rather let themselves be guided through the construction site of the Railway Worlds in the health resort of Rathen.

Lothar, Margot, Reiner and Rainer, as well as Frank at times, led the guests around the property in small groups.

Some guests, here Uwe Kunze with parents from Taucha near Leipzig, had come from far away to take advantage of the unique opportunity.

René and his dad had their hands full with sometimes stormy gusts to avoid major "delays" on the moving trains.

Margot, Carmen, Christine and Petra took care of the physical well-being at the entrance. Many guests stayed with us with Swabian Maultaschen, wine and beer.

For this weekend only, many bridges and houses were placed in the facility to show the visitors what is being created here.

Of course, in addition to the huge dimensions of the whole facility, the moving trains in particular delighted the guests.

On September 16, 2006, another open day took place at the Kreiser tree nursery in Kreischa.

The visitors were enthusiastic about a small show route of the railway worlds in the health resort Rathen.

A passenger train and a freight train made their rounds on a raised bed.

In stormy but sunny weather, young and old watched the trains enthusiastically.

On May 13th, 2006 the family day "Märchenhaftes Rathen" took place again in the health resort Rathen.

A successful day came to an end with a magnificent rainbow in the Elbe Valley.

Of course, the Eisenbahnwelten in Kurort Rathen had built a representative garden railway line again.Along the fence on the street front of our property, various trains pulled young and old under their spell.

On Friday, a small wall was piled up along the fence, on which the trains presented themselves.

In wonderful weather, steam and diesel locomotives, passenger and freight trains made their rounds without any problems.As the sun slowly set, the bastion rocks shone again in the last daylight.Lothar was there for 2 days to answer questions from all "onlookers". That Lothar did not run out of spit with the many interested people borders on a miracle!

On Saturday, the Leipzig Carnival Club performed on stage and used our rooms as a cloakroom.

Reiner (with ei) more than earned his beer when setting up on Friday!

Rainer (with ai) replaced Lothar every now and then on Saturday and Sunday.

On Sunday afternoon Lothar and Frank (who is somehow always there and helps) had a beer while watching the successful presentation of the railroad worlds in Rathen!

On September 17th, 2005, the Kreiser tree nursery in Kreischa celebrated its 15th anniversary.

The visitors were enthusiastic about a small show route of the railway worlds in Kurort Rathen .The rails were laid between the most varied of plants.

Impressions from the health resort Rathen and the surrounding area

View towards the bastion during the day and in the late evening.

View from the railway world over the Elbe.

View from the railroad worlds to the Mönch in the most beautiful sunshine and in the morning mist.

January 2006, impressions at –18 ° C, the "Bergland" is stuck in the ice, while the "Ratiner" bravely fights through the ice.

The Railway Worlds in Kurort Rathen also presented themselves on this day.On a small part of the property directly adjacent to the street, some trains made their rounds and fascinated the visitors.

Young and old informed themselves about the gigantic project.

"And when I get to school, I'll stop by here as a visitor"!

There was a lot of interest in the painting competition "Who paints the most beautiful railroad".

At around noon it was time, Mr. Hanisch was allowed to report on the Radio PSR stage about the Railway Worlds project in Kurort Rathen.The numerous visitors eagerly listened to his words.

The statements were rewarded with much applause.

Winnetou, the one-eyed giant and Ronja the robber's daughter,all actors of the Rathen rock stage, stopped by the Eisenbahnwelten in Rathen.

The Railway Worlds in Kurort Rathen May 2005

View from the street, the future show workshop on the left and the future pension on the right.

The future entrance to the Railway Worlds in Rathen.

View between the buildings towards the Elbe.

To the top of the page